Part One “Flower Arranging Around the World”

The Art of Arranging Flowers Around the World Part One

The Chinese are credited with being the first people to put water in a container of cut flowers. It seems obvious now, but when the people in China were putting flowers in water, the rest of the world was braiding garlands, making wreaths and flinging petals.

Japan grasped the vision of combining cut flowers, water and containers from China with such enthusiasm and inspiration that different schools of thought with masters who created philosophies and design principles sprang into existence.

The Japanese culture expanded flower arranging into a meditative practice, which had its roots in beliefs and philosophies. It became an art form that inspired contemplation and transcended decorative and devotional functions.

In the sixth century a Japanese emissary to China brought back the knowledge of how to sustain life in cut floral material by adding water. Shortly after, the first formal school of flower arranging was established by a priest. The use of flower arrangements spread very quickly from the priesthood and temples to the nobility and their homes.

The Chinese people expressed balance and the interaction of objects within dimensions in space. Japanese arrangements consisted of the portrayal of heaven, man and earth, The designs were constructed with tall flowers or foliage to represent heaven, shorter ones at the bottom to represent earth and floral material in the middle symbolized the connectedness of man with the heavens above and earth below.

Our knowledge of the use of flowers in Egypt comes from the tombs, pyramids and sphinxes’ where enamels, bas-reliefs, carvings, jewelry and even actual plant materials have been discovered and made available for study. From these artifacts we learn that whether floral material was placed in bowls or formed into head wreaths, garlands or collars for honored guests, flowers and berries were combined in regimented, precise rows, not overlapped or casually collected. The colors were sharply segregated. During the years 2800 to 28 BC, the use of flowers in religious ceremonies, for decorative purposes in the home and for personal adornment was a highly important aspect of the culture.

Flowers were so abundant they were shipped to Rome. Water lilies, lotus, acacia, roses, violets, Madonna lilies, narcissus, jasmine and poppies were among the species commonly grown and used for arrangements. Fruits, vines and foliage were equally popular.

In ancient Greece (600-146 BC) floral wreaths and garlands were the preferred use for flowers. Wreaths were placed on the brows of living heroes, statues of gods, goddesses, famous mortals, and were used to honor the dead. Flower petals were tossed at festivals, ceremonies and during religious occasions.

Flowers and fruits arranged in low baskets were carried to the banquet tables in ancient Rome where guests were crowned and draped with massive floral wreaths and garlands. Fresh cut roses were dropped from the ceiling in a rain of extravagant colors and fragrance.

The eastern Roman Empire, located in Byzantium, developed techniques in floral art that were preserved for us to study within the church mosaics. Images of beautiful urns and chalices filled with symmetrical foliage “trees” built to high, tapering tips and decorated at regular intervals with clusters of flowers and fruits in pure jewel-like colors were meticulously placed in stone. The theme of art and beauty runs throughout history, and flowers are the predominant symbol.

After the fall of the Western Roman Empire and before the beginning of the Renaissance, little is known of flower art until the thirteenth century, or the Gothic period. During this era, flowers, foliage and fruits were freely used to decorate the great cathedrals. There are tapestries, paintings and illustrated manuscripts of the fourteenth and fifteenth centuries which show tall vases containing a few long stemmed flowers and the making and presentation of wreaths and garlands.

With the beginning of the renaissance (1400-1600) all art flourished. Large vases made of precious metals and stones were crafted to contain very tall arrangements that sat upon the floor or on windowsills. For the first time, we see natural arrangements of flowers in un-crowded containers as well as small, tightly concentrated bouquets.

In France, niches were designed to hold vases and urns for cut flowers. Arrangements were placed at intervals down the center of the dining room table, and smaller arrangements were a part of the décor in all elegant rooms.

The English painter, William Hogarth introduced the ‘S’ shaped or later called ‘Hogarthian curve’ to floral design. Flowers and foliage were gently coaxed into rhythmical and symmetrical designs that followed the curvature of the letter ‘S’. The buffet table came into its greatest elegance during this time. It provided the decorator with a stage for garlands, wreaths and pyramids of flowers, sweets and fruits. Whole rooms were lit with dozens of candles placed in tall, ornate candle holders, and the women wore flowers in their hair, and clusters of flowers were sewn to their silken gowns.

While the western world was breaking boundaries and exploring the feeling of freedom, growth and abundance, the eastern world was holding the vision of balance, flow and order.

During the last half of the eighteenth century and well into the nineteenth in Europe, Great Britain and America, a revival of simple, classic architecture, decorations and furnishings took place. This may have been in reaction to the extreme, flamboyant styles of the Baroque period that had preceded. Simple wreaths and garlands were once again worn and carried in the classic tradition by people of fashion. Cool and muted flower arrangements became popular, and the floral material was artfully arranged in careful, symmetrical designs.

The great impressionist painters of the nineteenth century in France, such as: Degas, Monet, Renoir, Cézanne and Van Gogh added invaluable examples of flower and fruit paintings to the art treasures of the world. They painted tables bearing vases of blossoms, bowls of fruit and open flowers tossed carelessly on beautiful fabrics. They artfully suggested still lives by painting vases of flowers with other objects as integral parts of the design. The feeling was romantic, rich, robust and natural. Every brush stroke spoke of the sanctity of life in all its shapes, shadows and forms.

Records showing the use of flowers in early America are sparse, but one can assume that early settlers must have utilized everyday containers like pitchers, cups and bowls to display flowers.

In the more developed colonies, treasures were brought from Europe and by the middle of the eighteenth century the China trade was bringing in oriental porcelains. The home manufacturing of glass and imported silver provided artists and craftsmen with materials for more elegant containers.

East met the west at the close of the nineteenth century and during the first decade of the twentieth century as the New Art or Art Nouveau came into fashion. Japanese wallpapers, screens and art objects depicting balance, restraint and passion blended beautifully with the simple, elegant styles that began to emerge. Many bouquets were in tall vases, the flowers slightly taller than the containers. And, due to western appreciation of Oriental art, arrangements of flowering shrubs set in low dishes and small, decorative bowls also became fashionable.

The art of flower arranging around the world continued 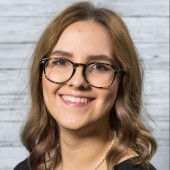 Amanda is an avid cook, reader and writer. On most weekends you can find her at yoga or at a brewery with friends.

The Many Faces of a Minimalist Wedding: 5 Wedding Decoration Ideas

DIY Preparing Containers For Your Arrangements